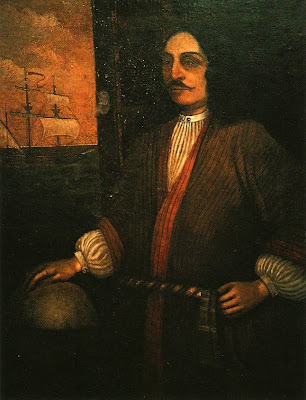 On 2 June 1609, he set sail on the Sea Venture along with other ships from Plymouth, England destined for Jamestown, Virginia carrying 500-600 people. On the 25 July, the fleet ran into a strong storm, likely a hurricane, and the ships were separated. The Sea Venture fought the storm for three days with Sir George himself at the helm throughout. On the morning of 28 July, with the water in the hold at nine feet, and crew and passengers driven past the point of exhaustion, Somers sighted land. He intentionally drove the ship onto the reefs of what proved to be Bermuda in order to prevent its foundering. This allowed the remaining 150 people aboard, and one dog, to be landed safely, although the Sea Venture was presumed lost by those who continued on to Virginia.

The survivors came ashore at Discovery Bay and stayed in Bermuda for 10 months where they formed the Bermuda colony, building a church and houses. Somers and Sir Thomas Gates oversaw the construction of two ships, the Deliverance and the Patience, from spars and rigging of the wrecked Sea Venture and local timber (Bermuda Cedar), and in May 1610 the ships set sail, with 142 castaways on board to the Virginia Colony.