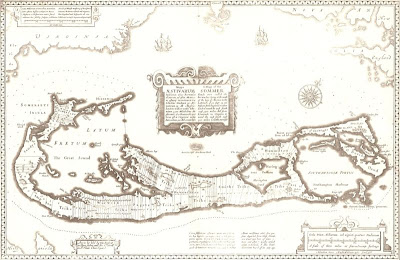 A 1676 map of the Somers Isles (alias Bermuda), by John Speed (based on the map of surveyor Richard Norwood). Clearly shown are the tribe roads cut parallel through the forest between the North and South Shores (except in St. Georges, the eastern-most subdivision, comprising the islands of St. George's and St. David's, the South-Eastern tip of the Main Island, and the various smaller islands between. This was general land, and not commercial.