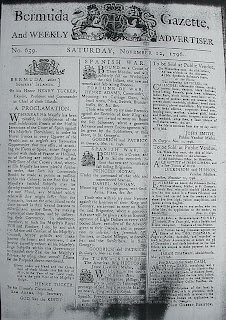 Bermuda Gazette of 12 November, 1796, calling for privateering against Spain and its allies, and with advertisements for crew for two privateer vessels.

The American War of 1812 was to be the encore of Bermudian privateering, which had died out after the 1790s, due partly to the build up of the naval base in Bermuda, which reduced the Admiralty's reliance on privateers in the western Atlantic, and partly to successful American legal suits, and claims for damages pressed against British privateers, a large portion of which were aimed squarely at the Bermudians. During the course of the American War of 1812, Bermudian privateers were to capture 298 ships (the total captures by all British naval and privateering vessels between the Great Lakes and the West Indies was 1,593 vessels).