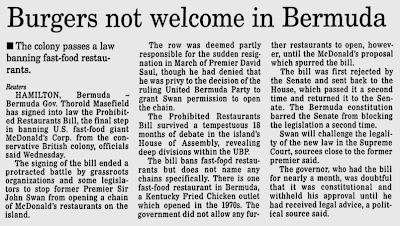 This matter has a fascinating history beginning in October 1992 and involving the McDonald’s Corporation and their representatives in Bermuda, debates in Parliament, the Premier, the Governor, the Bermuda Court of Appeal, and finally the UK Privy Council on 21st July 1999 when their Lordships agreed humbly to advise Her Majesty that the appeal to establish fast-food restaurants in Bermuda should be dismissed.

Read Privy Council Appeal No. 69 of 1998 outlining the case history.

* At the time McDonald's was humorously known in political circles as the Scottish Restaurant. This was an allusion to the theatrical superstition about the play Macbeth, which is often called the Scottish Play, as it is deemed bad luck (or in the McDonald's case, unseemly) to refer to it by name.