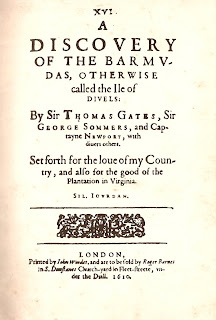 Cover of Sylvester Jordain's "A Discovery of the Barmudas", a first-hand narrative of the loss of the Sea Venture, the flagship of the Virginia Company, on the reefs of Bermuda, and the adventures of its survivors.