[1910] Mark Twain returns from Bermuda one week before his death 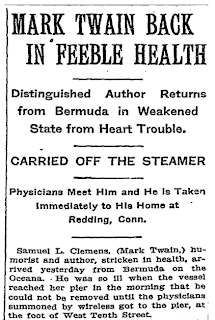 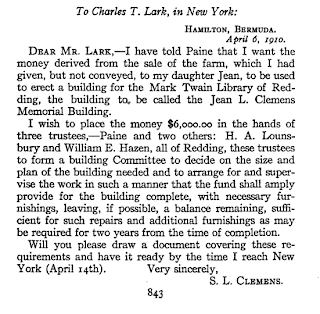 From the early Bermuda letters we may gather that Mark Twain's days were enjoyable enough, and that his malady was not giving him serious trouble, thus far. Near the end of January he wrote: "Life continues here the same as usual. There isn't a flaw in it. Good times, good home, tranquil contentment all day and every day, without a break. I shouldn't know how to go about bettering my situation." He did little in the way of literary work, probably finding neither time nor inclination for it. When he wrote at all it was merely to set down some fanciful drolleries with no thought of publication.

We sailed on the 12th of April, reaching New York on the 14th, as he had planned. A day or two later, Mr. and Mrs. Gabrilowitsch, summoned from Italy by cable, arrived. He suffered very little after reaching Stormfield, and his mind was comparatively clear up to the last day. On the afternoon of April 21st he sank into a state of coma, and just at sunset he died. Three days later, at Elmira, New York, he was laid beside Mrs. Clemens and those others who had preceded him.